Probably the best nights sleep of the whole tour night was had by all. More to do with how much work we had put in rather than plushness of the hotel. Functional would be more descriptive.

With a quick look at the route a collective decision was made to stick to the route for which we diligently and carefully prepared before we left.

It was possibly not the best decesion we made as we went through ploughed fields and had to strip off all the baggage on the bikes to get them over railway lines; not the easiest of tasks.

Then we hit the urban sprawl on the Essex side of the Thames and cycled through little used cycle tracks then on to the banks of the Thames. It was pretty disappointing really as the cycle path was in a bad state of repair with steep steps and locked gates which meant manhandling the bikes again.

We got past Tilbury Fort and then finally got to the Tilbury ferry pontoon. After a bit of lunch waiting for the ferry we got a cheery welcome aboard but had some difficulty getting all the bikes on. It was all sorted and within 10 minutes we were back in Kent; it may be the Kentish-Men side but the Men-of-Kent are on our way.

From Gravesend we followed the old Medway – Thames canal (never knew it was there!). However it made for a nice ride straight to Strood. We all regrouped to go through the Medway tunnel. It’s not great riding but it does cut out the stop/start riding going through the Medway towns.

We were quickly through the tunnel and on way out of the busy towns, mindful that now it’s the Man-of-Kent side. Two rivers to cross now. We stopped for a beer at the Happy Mariner in Lower Tydall and then set off again through the apple orchards of rural Kent.

Mark had a little issue with his bottle holder and then we pushed on skirting Sittingbourne as much as possible. Then it was on to Faversham as we kept off the A2 until the Brindley corner. From here we quick spurted around and down the hill to Boughto and then on to Canterbury looking good as we all kept in a peleton around the ring road. Then up to Bridge for a final pint and a debrief.

Everyone felt good if not a bit tired. We had a few little niggles but nothing us ‘Athletes’ can’t handle. Then we left going on our separate ways home to various corners of East Kent.

Another tour finished. It was somewhat different from other tours but nevertheless it was excellent riding  and ‘guys, a pleasure and privilege to ride with you’.

Until next time, your calm collective tour captain, Dale

Lovely moon last night over the Norfolk /Cambridgeshire border. All slept well, with a little autumnal chill & dew in the air. Up with the larks and a spring in our steps with Stubbsy left over spicy chicken things and lashings of hot tea and coffee, Bingo been up since 5 stoking the stove just to make sure the lads are fed and watered. 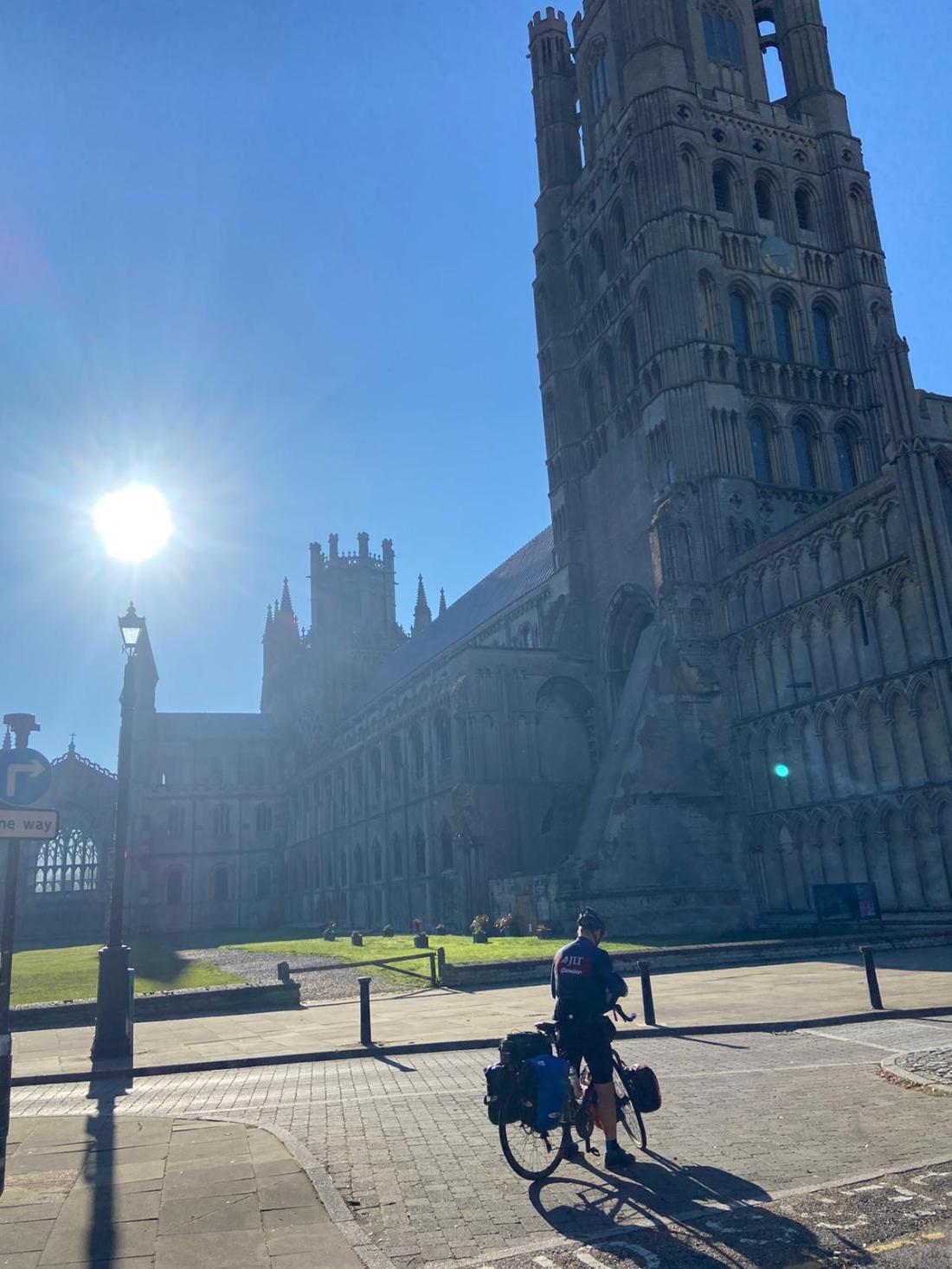 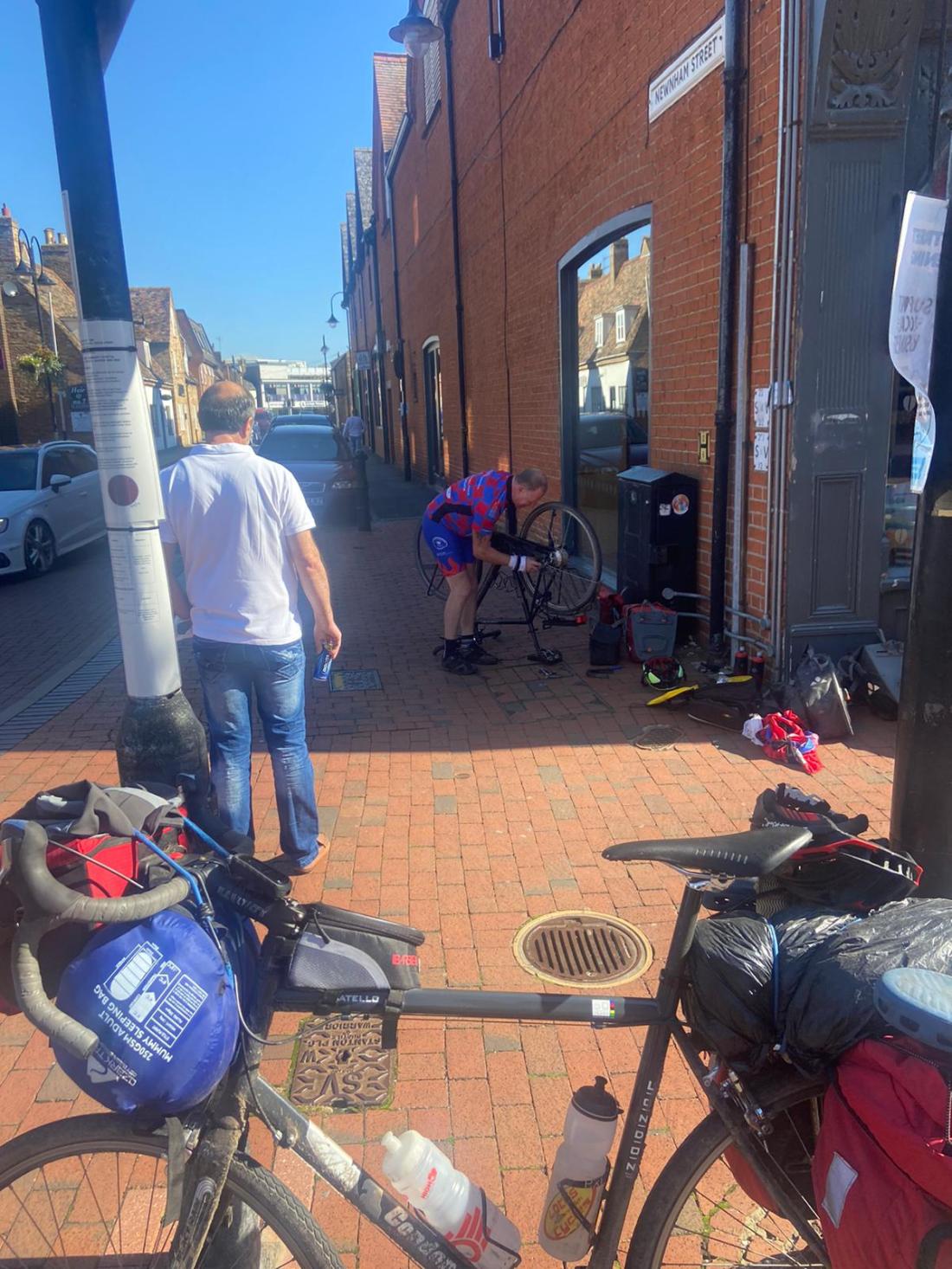 On the the road quite early whizzing along the lanes with a cheeky good morning to all and sundry, heading towards Ely foremost to see if we could get Daves back wheel fixed and have a well earned rest. Another childhood memory, walking around the city and cathedral, must admit quite spectacular, not sure I appreciated so much in the day though.

We then headed for Newmarket seeing the race horses on the gallops and putting up with the quips that all the guys were the same height as me, put up for lots of banter, all in good spirits has we headed out of the town past the racehorse gallops and stables.

Back onto the country roads and rollings hills, up to a farm, the tractor driver gave us a wrly smile and a wave, he knew what lay ahead, a bridleway for the next few miles pretty tough going at places, finally rejoined the road after a bit of huffing and puffing.

The shout went up to stop at the next pub for light refreshments well that was easier said than done. Even worse was to follow the captain had a flat, the 1st of the tour not bad as at least 40% has been off road. We decided to limp to the next village and change the tube then, after around 6 miles and pumping the tyre up couple of times, we mended the inner tube outside a village shop, with a bottle of beer and sandwiches as always the work was done in the normal calm and collective manner the captain always maintains. 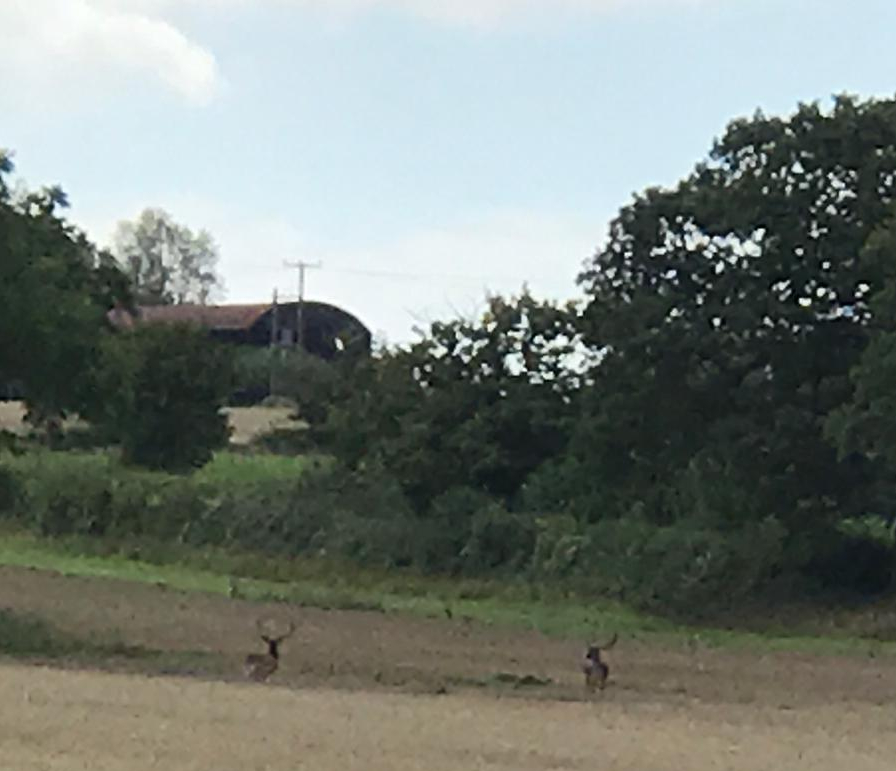 Finally back on the road, with a message to regroup at the 8 Bells, after talking with some locals they directed us to Sudbury and the 5 Bells, Bingo, Dave and Mark were already there another message we said we were 15mins away on the railway track, bit of a silence they did go down a track, that was clear when we arrived they were not there a few messages and confirmed we were furthest on the route, within 15mins all reunited,

Connor had booked rooms just outside Chelmsford, so with a bit of rerouting of we set for the final 20 odd miles, with big Dave leading us, all good as found the hotel together, few beers and meal all in all another eventful day on the bikes

Great night at the Dambusters last night, with Steve, Greg & Cathal, all of had a bit of a sore head this morning. After a big bowl of porridge and a few mugs of coffee we set off just after 8.

Had some lovely country lanes, then a cycle track along the river Witham really good track and made excellent time with next to no-one around. Once again the track was a disused railway lines and fully paved an absolute joy to ride on. We at stopped a pub on the river just outside Boston for light refreshments or hair of the dog. 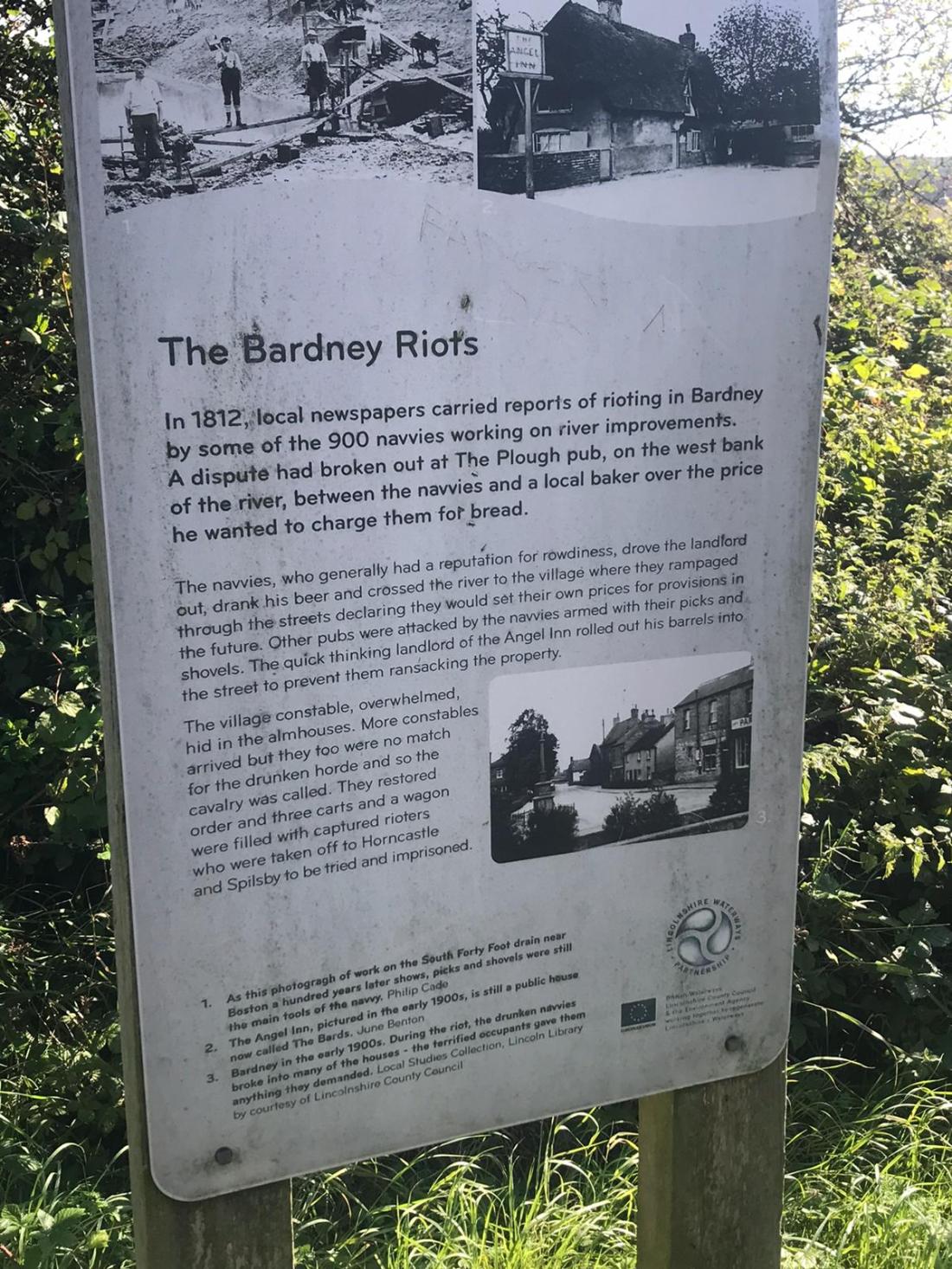 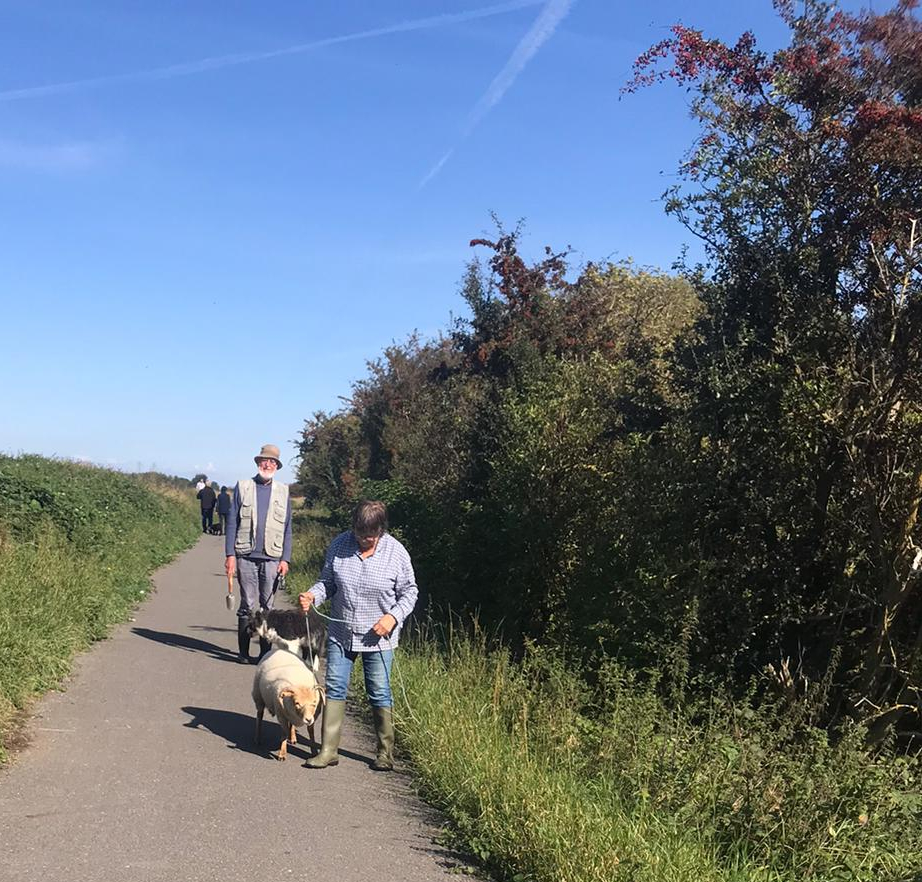 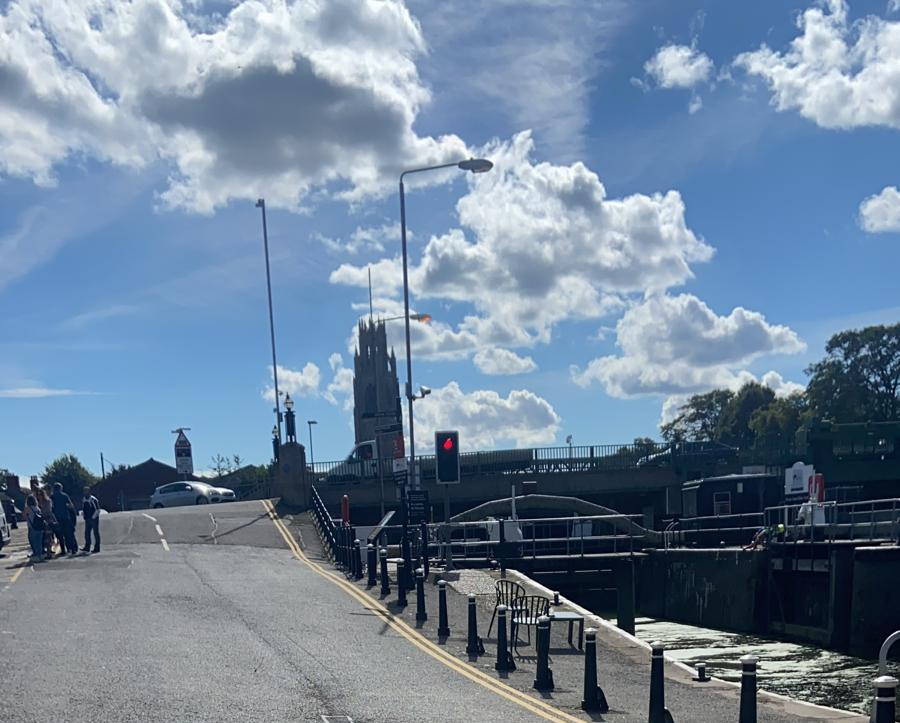 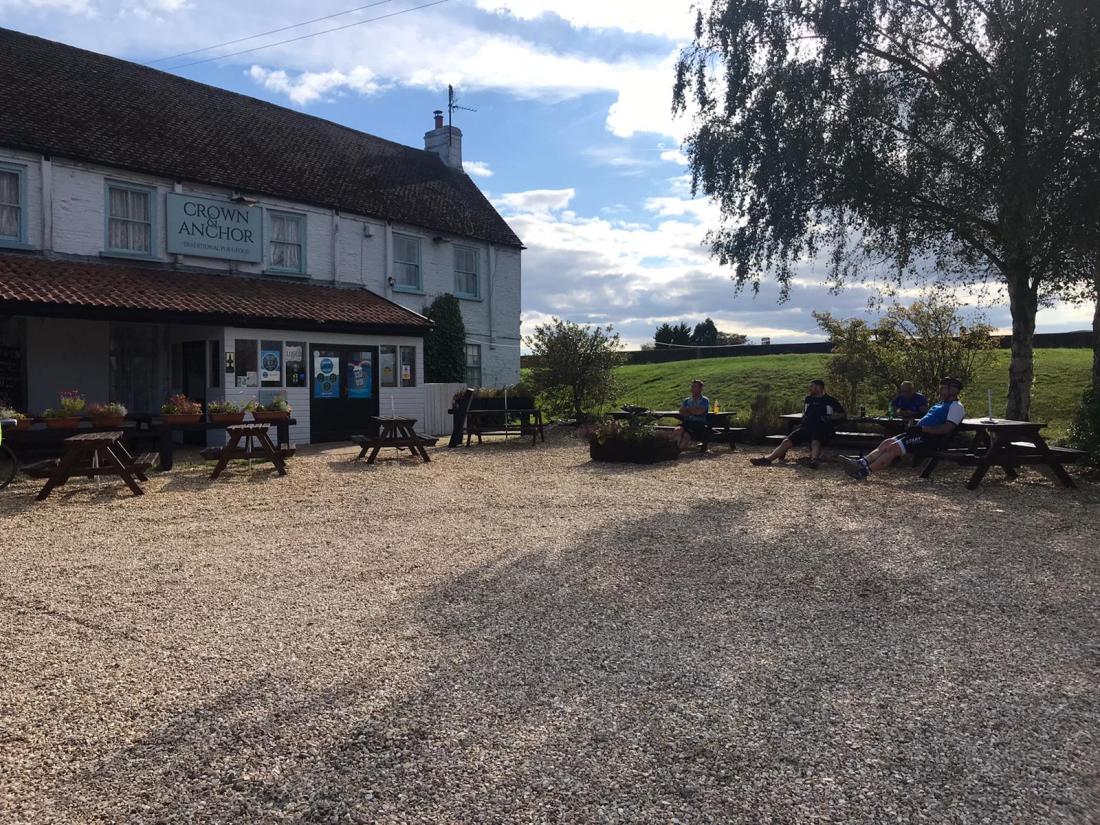 Went through the centre of Boston then headed on south on the country lanes towards King’s Lynn, with just a small section on the busy A17. We skirted around King’s Lynn and headed towards Downham Market, a small market town in Norfolk and had dinner in the Whalebone before cycling off into the sunset to find a wild camping place.

We duly found place on route for tomorrow in a field adjacent to a railway line, no need to worry about keeping us up as we were all knackered. Lights out and ‘good night’.

On this tour we are supporting 10 year-old Kobi Turnbull who has bone cancer and also again promoting Slide Away for their work in helping bereaved children.

We are hoping to raise £4000 to divide equally between these causes.

You can donate at our JustGiving page here. Many, many thanks.